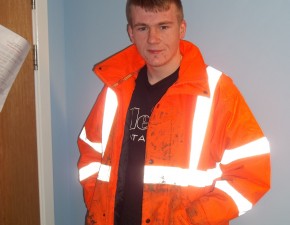 CS was referred to Stage 2 at DEAP after having been unsuccessful in completing several other courses in the area. Due to ongoing issues with drugs and homelessness CS felt unable to continue with the courses he was on and he took some time to get his priorities in order.
With a new positivity he made the decision to come to DEAP to start on the Stage 2 programme. In the early stages CS was working in the training centre on the Personal Development level 3 award. Although he was clearly capable and able to complete his work he found the indoor setting to be restrictive.
Having discussed with CS what placement would be ideal for him and what would meet his needs we were able to secure a placement with Living Solutions in Cowdenbeath. CS originally agreed to work 3 days on placement and one day in the training centre. It didn’t take long for him to find he was talented in groundwork. With this in mind CS decided to spend his full Monday to Friday on placement. Sadly while on placement bad fortune met CS again and he found himself homeless. He was spending time between friends and families houses and ultimately ended up in homeless accommodation. Despite all of this CS didn’t stop attending his placement.
CS is now in a much more positive place having recently been given a flat of his own and feeling positive about the future.
In finishing Stage 2 CS will be going on to volunteer with Living Solutions until January 2016 when he will go on to a Stage 3 with progression to a Modern Apprenticeship after that.