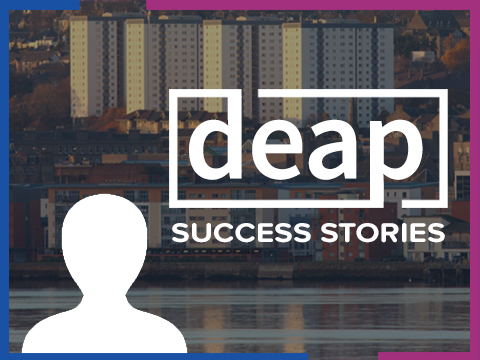 Chloe registered for the Steps to Success Project in June this year having completed 5th year at school. She had no work experience and her confidence and self-esteem were very low. She had been applying for jobs, but receiving no responses to them. Our Support Workers explained to Chloe the services DEAP could offer to help to get her into a positive destination. In particular, she was interested in the Employability Fund and we suggested that she discuss this with her Careers Advisor at SDS.

Chloe was eligible was Stage 3 of the Employability Fund and referred to DEAP at the end of June. Initially Chloe had a number of unauthorised absences which resulted in a delay with her training and work placement. Eventually Chloe was able to say that there were a lot of family issues she was dealing with this which was affecting her training. Gradually Chloe’s attendance improved significantly and she completed her NQ level 4 in PC Passport.

With the improvement in her attendance and participation in employability workshops Chloe’s confidence increased and she felt ready to go on a work placement. Chloe decided that child care was her first choice as this was the type of work she wanted to pursue as a career. We sourced a child care placement for her at Rosemount Little Rascals and her PVG form was submitted to Disclosure Scotland. Initially Chloe enjoyed the placement, but very soon realised that she no longer wished to pursue child care as a career. Feedback from the employer was that Chloe was a nice girl, but did not show any enthusiasm for child care and lacked confidence.

Following the 2 week work placement Chloe returned to the Centre and we discussed the feedback from the employer with her. Chloe was unsure what career options she wished to pursue. We discussed the Community Jobs Scotland Trainee Administrative vacancy at DEAP Arbroath with Chloe and she seemed very interested in this. Chloe was advised to return to her Careers Advisor at Skills Development Scotland to discuss this further and to check her eligibility.

Chloe presented herself well at interview on 19 October 2015 and has been offered the position starting on 2 November 2015.